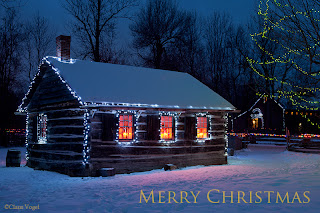 Wishing you all a very Merry Christmas and Happy Holidays.
Cheers,
Claus

Posted by Claus Vogel at Saturday, December 22, 2012 No comments: 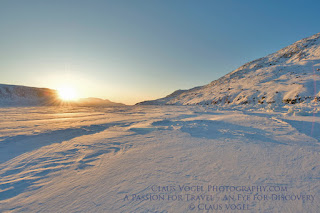 Happy Winter Solstice!  At long last the unofficial countdown to summer 2013 can begin!

Here's an article I wrote for the Nov/Dec 2005 issue of Above & Beyond (the inflight magazine of First Air).  Enjoy!

SUN DANCE
The seasonal journey of the midnight sun

In the coming days as the fading rays of the midnight sun slip below the arctic horizon, another season of polar darkness unfolds.  This seasonal game of tug-of-war between continuous sunlight and winter darkness occurs because our earth orbits the sun on an inclined axis of 66 ½o.  As a consequence, the midnight sun, or polar night, is only observed in areas within the Arctic Circle, an imaginary boundary circumnavigating the earth at 66 ½o N.

During the winter solstice, on December 21st, the far north is angled furthest from the sun.  On that day, every region within the Arctic Circle is shrouded in darkness for at least 24 hours; the number of days in which the sun lies below the horizon progressively increases the further north one travels - this ranges from one day on the Arctic Circle to a maximum of six months directly at the pole.  Conversely, six months later, during the summer solstice, the opposite holds true and the same region experiences at least one full-day of the midnight sun.

Imagine, if you will, spending the polar winter on the North Pole itself.  After months of darkness a time approaches in mid-February when a faint glow in the distance becomes noticeable.  This glow completely circles the horizon every 24 hours and becomes brighter with each passing day.  By late February the faintest stars disappear in the brightening sky as the sun tries to clear the horizon.  Finally, on March 21st (spring equinox), the upper edge the solar disk appears for the first time in six months.   The sun continues its gradual climb until it reaches its highest point in the sky on June 21st, the summer solstice.  Then, sadly, it begins its slow descent until it disappears below the horizon during the fall equinox in late September where it will remain for the next six months before rising again to cast its rays on the top of the world.

Sunset and Sunrise times (2006) for communities on Baffin and Ellesmere Islands.

☼  Community lies below the Arctic Circle
Posted by Claus Vogel at Friday, December 21, 2012 No comments: