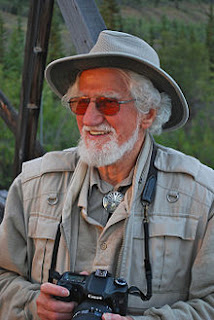 Hans Blohm, Member of the Order of Canada
©Bob Davis, 2009
Congratulations to my dear friend, fellow photographer and author, Hans Blohm, for being appointed a Member of the Order of Canada by His Excellency the Right Honourable David Johnston, Governor General of Canada.  The official announcement came early this afternoon from Rideau Hall.  The honour pays tribute to Hans' lifelong commitment to "preserving Canada's northern heritage through the lens of his camera".

For over three decades, Hans, an internationally acclaimed Master Photographer and author, has criss-crossed the North by floatplane, automobile, sailboat, snowmobile and dog team while in pursuit of capturing images and stories of Canada's Arctic and its peoples.  His iconic landscapes and portraits have graced the pages of countless books and magazines, while his photographs of the aurora, mountains, minerals, and pristine waterfalls have been honoured on numerous Canadian postage stamps.  In 2006, First Air chose his stunning Inukshuk image to adorn the pride of the famed airline's passenger jet. Blohm's photo exhibits have travelled the globe and been admired by thousands, while his 15 books, ranging from 'coffee-table' pictorials to a collection of essays from northerners, have sold worldwide and been translated into German and Inuktitut.

Hans is also hailed as one of the best computer microchip photographers in the world.  In 1981 he was commissioned by Mitel to photograph 1/25th of a 1/4" square microchip and have it enlarged 16 million times in area.  The murals were displayed in the front lobby of the Mitel Complex in Ottawa.   Hans  is also an accomplished architectural photographer.

Born in 1927 in northern Germany, and immigrating to Canada in 1956, Hans' charismatic character is infectious, his love for Canada's North undying and his commitment to hear and share the stories of the northern people unwavering.  All of these have gained him the trust, respect and friendship of Inuit and non-Inuit throughout Canada and around the world.

The honesty and openness of those relationships, and the shared respect on which they are built on, continue to inspire him.  And while it may be true that Hans Blohm's outstanding northern images have long documented the very essence of northern culture, it is the man's lust for life and the friendships he's formed in the North that continue to bring new joy and laughter to those who he meets.

The Order of Canada, one of our country's highest civilian honours, was established in 1967 to recognize a lifetime of outstanding achievement, dedication to the community and service to the nation.

Congratulations Hans on finally receiving the recognition you so well deserve!

ORDER OF CANADA ANNOUNCEMENT on December 30, 2011

VOICE OF THE NATIVES, one of Hans' many books

Please drop me a line.